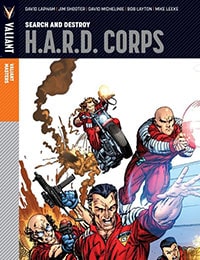 Collected for the very first time - the debut adventures of the H.A.R.D. Corps in the original Valiant Universe by legendary creators Jim Shooter (Secret Wars), David Lapham (Stray Bullets), David Michelinie (Amazing Spider-Man), Bernard Chang (Green Lantern Corps) and more! The most important technological breakthrough of the century might also be its most dangerous. After years of trial and error, multinational conglomerate Omen Enterprises has finally perfected a cybernetic brain implant that will change the face of modern warfare forever. With a legion of ex-soldiers at their disposal, Omen is building the private army of the future - a squadron of enhanced commandos that calls itself the H.A.R.D. Corps! But even with the powers of flight, telekinesis, and mind control at their command, not everyone is willing to volunteer for service...but Omen has ways of making you fight for a paycheck.