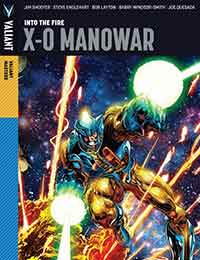 Aric of Dacia, a fifth century Visigoth warrior abducted and enslaved by the brutal Spider Aliens, fights his way free of his captors and steals their ultimate weapon, the X-O Manowar armor. But 1,600 years have passed while the Spider Aliens held Aric captive and the time hereturns to is not his own. Trapped in the modern day, Aric is now the last of his people, a savage warrior out of time in a world of corporate treachery and casual deceit. But, armed with the power of the X-O Manowar armor, Aric will rule... and he will make the Spider Aliens pay.
Start reading the debut adventures of Valiants original armored hero right here, featuring work from visionary creators Bob Layton (Iron Man), Barry Windsor-Smith (Wolverine: Weapon X), Joe Quesada (Daredevil, Amazing Spider-Man), and many more. Collecting X-O MANOWAR (1992) #0 and X-O MANOWAR (1992) #1-6.