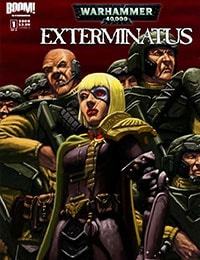 In this series, we focus on the Inquisitors of Warhammer 40,000. The most insidious and dangerous threat in the 41st Millennium is the one you cannot see. It is this thought that spawned the Inquisition, an organization devoted to rooting out traitors, heretics, mutants and aliens that undermine Humanity. They scour the Imperium searching for threats without, and within. Immediately following the events of WARHAMMER 40,000: DAMNATION CRUSADE, Inquisitor Delius Alastor is dispatched to investigate why a pair of dormant Titans has gone undetected beneath the city of Carrion Gulf? After a mission that saw his retinue slaughtered and left him terribly scarred at the hands of a Thousand Sons Chaos Space Marine, Alastor is stricken with nightmares - but knows he cannot yield to the fear. The eyes of the Inquisition are on him, curious as to how deep his wounds truly go. Is Alastor capable of meeting what lurks beneath Carrion Gulf? Warhammer 40,000 novelist Dan Abnett, multiple Eisner Award-nominee Ian Edginton, and rising star artist Daniel Lapham bring you another tale of savage Warhammer 40,000 action.