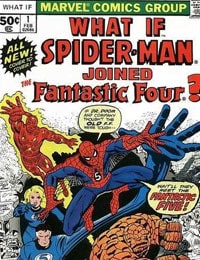 Spidey joins the Fantastic Four but the result is that Sue leaves the group to go with Namor as a concubine. Spidey gets to face FF villains and vice versa.
In this issue we see Peter Parker in need of money. Just as he did in the first issue of Amazing Spiderman, he goes to the Fantastic Four to join, and hopes to earn a paycheck. We are then given an introduction to the Marvel Multiverse by the watcher, and told many Universes mirror ours and differ greatly, all because of one small difference. In this case instead of turning him down, the Fantastic Four agree to have him in the group. This actually becomes a problem, since Reed does not want to have Sue in danger he constantly tells Sue to stay behind. Feeling unwanted and useless she finds solace in the arms of the Sub-Mariner.