What If Aunt May Had Died Instead of Uncle Ben? Comic 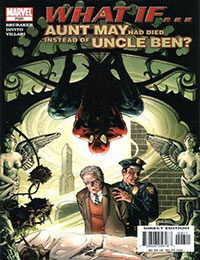 What If Aunt May Had Died Instead of Uncle Ben? Average 1.00/5 - out of 1 total votes.
Follow 0 Followers
Read from beginning Read the latest

When the burglar breaks in, he kills Aunt May instead of Uncle Ben. Peter goes after the burglar and ends up killing him. Before the police arrive, Ben gets there and has Peter leave, confessing to the cops that he was the killer instead. He's sent to prison and Peter ends up giving up being Spider-Man as a hero.