What If? Secret Wars Comic 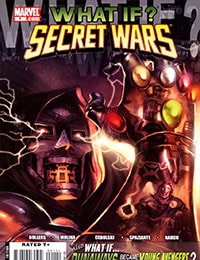 From the Watcher’s Datalog: When a handful of Earth’s heroes and villains were kidnapped across several light years to the alien Battleworld to fight a Secret War, Doctor Doom thought he’d successfully stolen the power of the cosmic entity called the Beyonder. However, Doom was unaware he had only stolen a portion of the Beyonder’s near limitless abilities and the tables were turned, stripping the uber-villain of his newfound godhood. But what if…? What if events occurred differently? What if Doom discovered his mistake before it was too late and won the Secret War? In other words…“What If Doctor Doom Kept the Beyonder’s Power?”
And featuring the conclusion of a special five part back-up story, 'What if the Runaways Became the Young Avengers?' In this issue... “Young Avengers Assemble!”