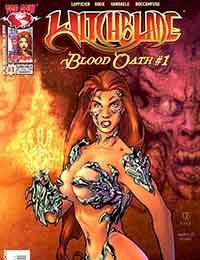 Sara Pezzini is a NPD detective who handles some of the more bizarre cases the crime-ridden city has to offer. A lot of those cases seem to end up having something or other to do with the supernatural. Good thing Sara is the wielder of the Witchblade, an ancient weapon that has been passed down from warrior woman to warrior woman throughout the ages in the battle against the forces of darkness. In this one-shot, starring characters from the French comics publisher Semik and written/drawn by that companies high profile talent, the Witchblade and Sara find themselves in battle with a demon that dates back to the time of Joan of Arc—herself a former bearer of the Witchblade. Demons, blood, swords, scantily clad women, heroic soldiers, and more Await in this story that adds yet another layer to the depth of this character. Read it.
— Ryan H. Jackson.